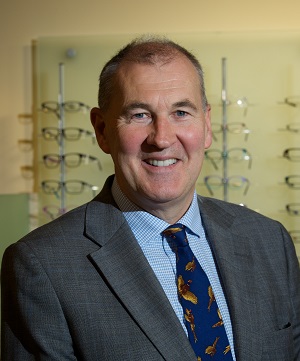 Peter practices fulltime within Peter Ivins Eye Care in Bearsden, offering a range of specialist services including ocular therapeutics, specialist contact lens and dry eye management clinics. Peter is considered a global key opinion leader in the contact lens industry, having been part of a team working on the first soft disposable contact lens. He is part of the teaching faculty at the Johnson and Johnson's Vision Care Institute where he lectures on a variety of subjects to optometrists, opticians and clinical staff from around the UK. He has and continues to lecture extensively in the UK, USA, Australia, China, South Africa and Europe on various subjects including contact lenses, vision in sport and business management. Peter was one of the first in the UK to qualify as an independent prescribing optometrist, meaning he can manage and prescribe medicines for a vast array of eye conditions.
He is the director of Purple Ivy a company offering business as well as clinical skills advice to both independent and multiple opticians.

Peter has lived in Bearsden for over 40 years and is the father of four children and grandfather to one. He is a keen golfer and has maintained a single figure handicap for over thirty years. 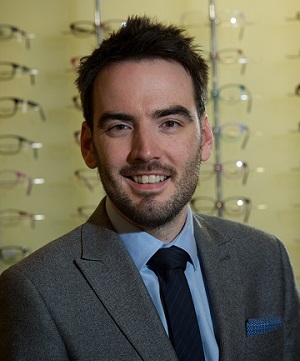 Craig is a practicing optometrist based at fulltime Peter Ivins Eye Care in Bearsden. He started his career in optics in 2003 working for Peter at Black and Lizars. He graduated from Glasgow Caledonian University in 2007 and from the College of Optometrists in 2008. He is a clinical advisor and consultant to a number of companies and is a regular contributor to industry magazines Optician and Optometry Today having published numerous articles on topics varying from Myopia Management in children, to Glaucoma management and diagnostic imaging techniques.

Craig lectures extensively throughout the UK and Europe on a variety of subjects including optical coherence tomography, macular screening techniques, specialist contact lenses fitting and use of cutting-edge technology in optometry. Craig developed a nationwide macular screening programme for Scotland's largest independent optical chain, the first of its kind in the UK, during which he experienced over 1000 patient episodes in the specialist macular screening clinic.

He is a consultant with Purple Ivy a bespoke business consultancy, where he offers insight and advice into integrated practice management systems, website design, use of social media and business intelligence solutions. He is a clinical tutor to 4th year undergraduate students from Glasgow Caledonian University's optometry programme, where he is also a visiting lecturer. He is also a tutor as part of the University of New South Wales Preceptorship Program.

Craig has a special interest in children’s vision, visual stress, myopia control, orthokeratology and specialist contact lens fitting. Craig is a member of The College of Optometrists, Association of Optometrists and British Contact Lens Association.

Craig is also a professional musician performing with The Tatties, a Scottish ceilidh band and Sugarush a popular function band. Craig and his wife Jennifer were married near Rome, Italy in September 2012. The couple have one son, Noah, born in July 2017. 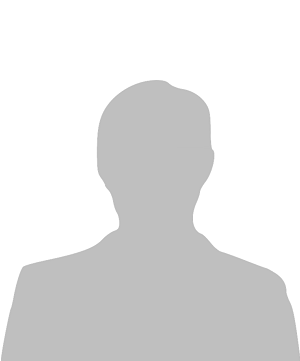 Asim is based part-time at Peter Ivins Eye Care. He is a practicing optometrist with over a decades experience with Black and Lizars. During that time he practised with Peter and Craig as a specialist optometrist and was an accredited practitioner as part of the Glasgow’s’ Integrated Eye Care Service (GIES) shared care scheme. He was also a Pre-Registration supervisor to numerous graduate optometrists.

Asim is a graduate of Glasgow Caledonian University, having studied and graduated alongside Craig. He is currently studying towards a Master’s in Business Administration (MBA) at Strathclyde University. He has also contributed to many CET articles for a variety of companies and lectures to optometrists and opticians throughout the UK on a variety of topics. Asim splits his time between Peter Ivins Eye Care, his role as Clinical Trainer with Zeiss and his MBA studies. He has a special interest in specialist contact lens fitting, optical coherence tomography and advancements in clinical diagnostic technology.

Asim married his wife Sumara in 2010. He is a single figure handicap golfer and was a groomsman at Craig’s wedding in 2012. 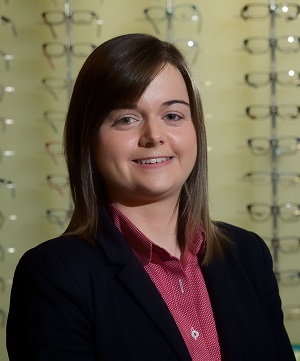 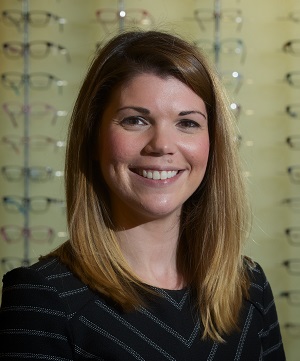 Jennifer started working in optics in 2001 working as an optical assistant whilst studying towards her undergraduate degree in Ophthalmic Dispensing at Glasgow Caledonian University. Jennifer graduated from university in 2005, embarked upon her graduate year in 2006 and completed her post-graduate diploma becoming a Fellow of the Association of British Dispensing Opticians in 2007. After fully qualifying as a dispensing optician she then worked as a dispensing optician and specialist laser councillor for Optical Express before moving to Black and Lizars in late 2007.

After 2 years with Black and Lizars in Giffnock she was promoted to Assistant Manager of the Milngavie practice. In 2010 Jennifer moved back to Optical Express as store manager of the Bearsden and Milngavie branches where she worked until 2015.

Jennifer was married to our optometrist Craig McArthur in 2012 in a wedding ceremony in Rome, Italy. The couple have one son, Noah McArthur born July 2017. 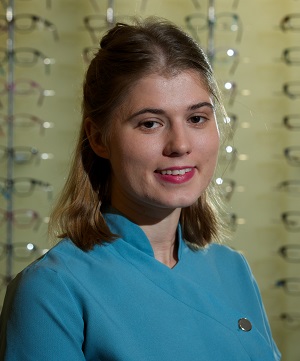 Shevaun Breslin joined our expert team full time as a trainee Dispensing Optician in 2018. Shevaun is enrolled in the British Association of Dispensing Opticians distance learning diploma programme. Under the stewardship of our optometrists Peter Ivins, Craig McArthur, Asim Sheikh and our dispensing opticians Jillian Forrie, Jennifer McArthur and Alison Halliday, Shevaun will embark on a three-year training program working full time within Peter Ivins Eye Care with block release to the ABDO training establishment in Birmingham for lecture and continual assessment. Shevaun should qualify as a dispensing optician and become a fellow of the British Association of Dispensing Opticians in 2021.

Shevaun is already highly experienced in optics have previously worked for Boots Opticians and most recently worked in Paisley’s Royal Alexandria Hospital. 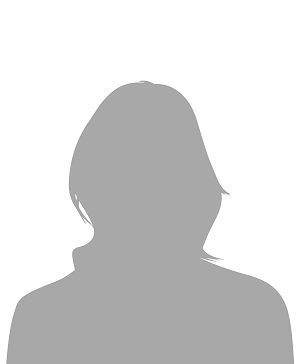 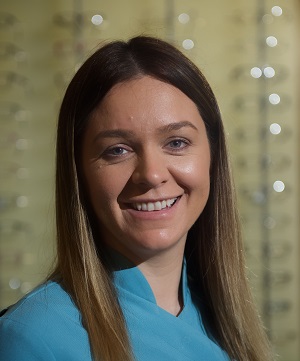 Kaye brings with her a breadth of experience in optics having previously worked for Black & Lizars and Specsavers in a variety of roles from clinical assistant, dispensing assistant and practice manager. Kaye has university accredited qualifications in dispensing optics and optical clinical from Anglia Ruskin University. Kaye has 10+ years' experience in hospitality management having worked in large luxury hotels and restaurants. Kaye combines her clinical and dispensing knowledge with the highest levels of customer service. 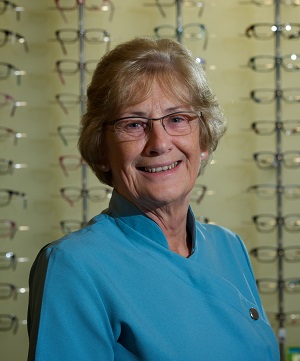 Myra has lived in Bearsden and Milngavie for over 40 years years. She has worked with Mr Ivins for since 1998. She first joined C Jeffrey Black opticians in 1996, moving with Mr Ivins to Black and Lizars in 1998. Visual field analysis and retinal imaging are Myra's main areas of interest and expertise. 40+ years in Bearsden, 20+ years in local optics and a photographic memory for faces and names means there are very few of our patients Myra doesn't already know.

Myra is the mother of two daughters and a son, and a grandmother of six. 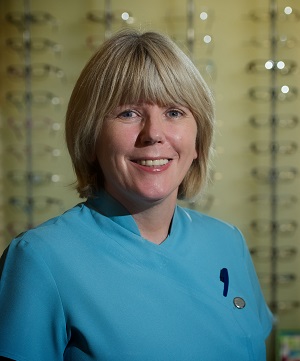 Elaine Slaven joined our expert team in 2015. Elaine brought with her over 30+ years of experience from her previous role in the banking sector with the Lloyds Banking group. Over the course of her career with Lloyds Elaine worked in a variety of roles from business support and relationship manager to a heritable security specialist.

Within her role as practice administrator at Peter Ivins Eye Care Elaine oversees our direct debit management, banking and stock inventory amongst many other things.

Elaine is currently studying towards a PDA in Book-Keeping at City of Glasgow College. She has lived in the Bearsden / Milngavie area for over 40 years and is the mother of one son.

Fawaad Shafi joined our expert team in 2018. Fawaad splits his time between Peter Ivins Eye Care, Glasgow Caledonian University, and his various hospital placements. Fawaad is currently enrolled in Glasgow Caledonian University’s Orthoptics undergraduate programme. Over the 4-year course Fawaad will gain the skills and experience required to be a full-time clinical orthoptist. Orthoptists are experts in the eye movements, eye muscles and neurological issues with the muscles of the eye. They form an integral cog in the hospital eye care system as part of multi-disciplinary teams compromised of orthoptists, optometrists and ophthalmologists charged with treatment of children with squints, muscle problems and amblyopia, as well as adults with neurological issues. 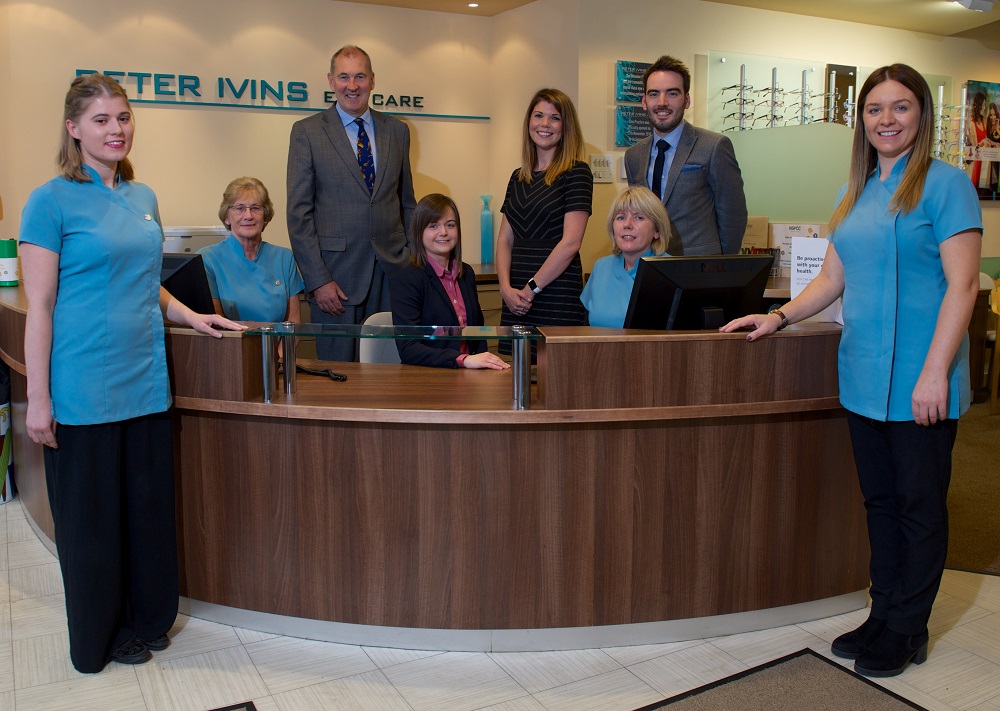