Early detection, through regular and thorough eye examinations is the key to protecting your vision from damage caused by glaucoma.

It is important to have your eyes examined regularly. Your eyes should be tested:

Why choose us for your glaucoma screening examination?

We marry our clinical expertise and experience with state-of-the-art diagnostic equipment to provide a detailed and thorough eye examination, taking into account your general health, family history and eye condition - allowing us to calculate your potential risk of developing glaucoma and thus creating a bespoke monitoring plan to ensure glaucoma is diagnosed at the earliest stage possible.

Peter Ivins (read more about Peter) has over 25 years’ experience in optics and formerly practised in Glasgow’s Southern General Ophthalmology Glaucoma Clinic. Craig McArthur (read more about Craig) currently teaches the glaucoma module of the post-graduate Independent Prescribing qualification at Glasgow Caledonian University. Craig has published numerous papers and articles on glaucoma diagnosis. Peter and Craig together have delivered lectures at several of the UK’s largest optometric conferences on the subject of glaucoma.

Our comprehensive glaucoma screening examination involves TEN examinations to ensure we diagnose glaucoma as in early in the disease process as is currently possible. We use industry leading cutting-edge glaucoma diagnosis and monitoring technology and software from Carl Zeiss. Our Zeiss Cirrus 4000 High Definition OCT, Zeiss Visucam 200 High Definition Retinal Camera, Zeiss Humphrey 720i Visual Field Analyser and the Zeiss Forum and Glaucoma Workplace represent the latest advancements in glaucoma diagnosis and monitoring.

To be safe and accurate, 10 factors should be checked before making a glaucoma diagnosis:

2. Indirect ophthalmoscopy – examining the shape and colour of the optic nerve.

4. Gonioscopy – examining the angle in the eye where the iris meets the cornea.

9. Anterior OCT – Imaging of the angle in the eye where the iris meets the cornea. 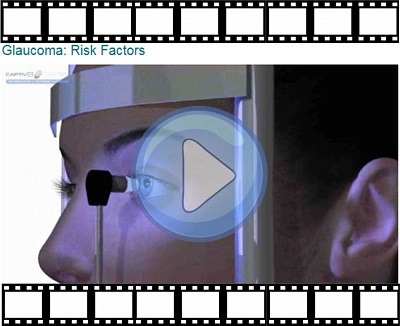 Everyone is at risk for glaucoma. However, certain groups are at higher risk than others.

People at high risk for glaucoma should get a complete eye exam, including eye dilation, every one or two yearsdepending on their age.

The following are groups at higher risk for developing glaucoma.

After cataracts, glaucoma is the leading cause of blindness among people of African descent. Glaucoma is six to eight times more common in African Americans than in Caucasians.

Glaucoma is much more common among older people. You are six times more likely to get glaucoma if you are over 60 years old.

The most common type of glaucoma, primary open-angle glaucoma, is hereditary. If members of your immediate family have glaucoma, you are at a much higher risk than the rest of the population.

Recent studies indicate that the risk for Hispanic populations is greater than those of predominantly European ancestry, and that the risk increases among Hispanics over age 60.

Some evidence links steroid use to glaucoma. A 1997 study reported in the Journal of American Medical Association demonstrated a 40% increase in the incidence of ocular hypertension and open-angle glaucoma in adults who require approximately 14 to 35 puffs of steroid inhaler to control asthma. This is a very high dose, only required in cases of severe asthma.

Injury to the eye may cause secondary open-angle glaucoma. This type of glaucoma can occur immediately after the injury or years later.

Blunt injuries that “bruise” the eye (called blunt trauma) or injuries that penetrate the eye can damage the eye’s drainage system, leading to traumatic glaucoma.

The most common cause is sports-related injuries such as baseball or boxing.

Other possible risk factors include: 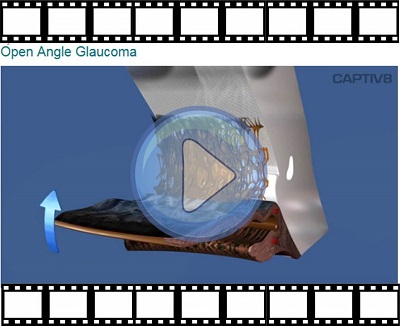 Glaucoma is actually a group of diseases. There are dozens of different forms of glaucoma. The most common type is hereditary.

Open Angle Glaucoma Video - Peter Ivins Eye CareThis is the most common form of glaucoma. It happens when the eye’s drainage canals become clogged over time.

The inner eye pressure (also called intraocular pressure or IOP) rises because the correct amount of fluid can’t drain out of the eye. With open-angle glaucoma, the entrances to the drainage canals are clear and should be working correctly. The clogging problem occurs further inside the drainage canals, similar to a clogged pipe below the drain in a sink.

Glaucoma is an eye disease that gradually steals vision. There are typically no early warning signs or painful symptoms of open-angle glaucoma. It develops slowly and sometimes without noticeable sight loss for many years.

Most people who have open-angle glaucoma feel fine and do not notice a change in their vision at first because the initial loss of vision is of side or peripheral vision, and the visual acuity or sharpness of vision is maintained until late in the disease.

By the time a patient is aware of vision loss, the disease is usually quite advanced. Without proper treatment, glaucoma can lead to blindness. The good news is that with regular eye exams, early detection, and treatment, you can preserve your vision.

Because open-angle glaucoma has few warning signs or symptoms before damage has occurred, it is important to see our optometrists for regular eye examinations. If glaucoma is detected during an eye exam our optometrists can refer you to a glaucoma specialist who can prescribe a preventative treatment to help protect your vision.

In open-angle glaucoma, the angle in your eye where the iris meets the cornea is as wide and open as it should be, but the eye’s drainage canals become clogged over time, causing an increase in internal eye pressure and subsequent damage to the optic nerve. It is the most common type of glaucoma, affecting about four million Americans, many of whom do not know they have the disease. 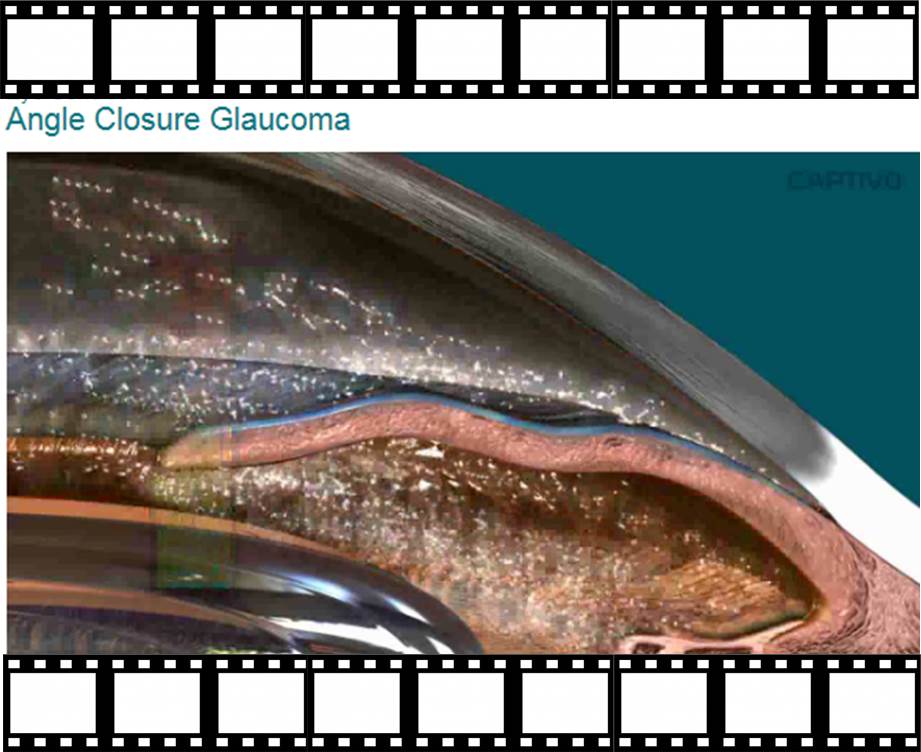 This type of glaucoma is also known as acute glaucoma or narrow angle glaucoma. It is much rarer and is very different from open-angle glaucoma in that the eye pressure usually rises very quickly.

This happens when the drainage canals get blocked or covered over, like a sink with something covering the drain.

With angle-closure glaucoma, the iris is not as wide and open as it should be. The outer edge of the iris bunches up over the drainage canals, when the pupil enlarges too much or too quickly. This can happen when entering a dark room.

A simple test can be used to see if your angle is normal and wide or abnormal and narrow.

Symptoms of angle-closure glaucoma may include headaches, eye pain, nausea, rainbows around lights at night, and very blurred vision.

Treatment of angle-closure glaucoma usually involves either laser or conventional surgery to remove a small portion of the bunched-up outer edge of the iris. Surgery helps unblock the drainage canals so that the extra fluid can drain.

If you have angle-closure glaucoma in one eye, doctors may go ahead and treat the other eye as a safety measure.

In general, surgery for angle-closure glaucoma is successful and long lasting. Regular checkups are still important though, because a chronic form of glaucoma could still occur.

Those at higher risk for this form of glaucoma are:

How Normal-tension glaucoma is different

Glaucoma is a group of eye diseases that usually share common traits, such as high eye pressure, damage to the optic nerve and gradual sight loss. Most kinds of glaucoma involve elevated eye pressure.

Normal-tension glaucoma (NTG), also known as low tension or normal pressure glaucoma, is a form of glaucoma in which damage occurs to the optic nerve without eye pressure exceeding the normal range. In general, a "normal" pressure range is between 12-22 mm Hg.

The causes of NTG are still unknown. For some reason, the optic nerve is susceptible to damage from even the normal amount of eye pressure. Researchers continue to examine why some optic nerves are damaged by these relatively low eye pressure levels.

How Normal-tension Glaucoma is treated

Since so little is known about why normal eye pressure damages some eyes, most doctors treat normal tension glaucoma by reducing the eye pressure as low as possible using medications, laser treatments and conventional surgery.

Other types of glaucoma

Most other types of glaucoma are variations of open-angle or angle-closure types. These types can occur in one or both of your eyes.

Secondary glaucoma refers to any case in which another disease causes or contributes to increased eye pressure, resulting in optic nerve damage and vision loss.

Secondary glaucoma can occur as the result of an eye injury, inflammation, tumour, or in advanced cases of cataract or diabetes. It can also be caused by certain drugs such as steroids. This form of glaucoma may be mild or severe. The type of treatment will depend on whether it is open-angle or angle-closure glaucoma.

Pigmentary Glaucoma is a form of secondary open-angle glaucoma. It occurs when the pigment granules that are in the back of the iris (the coloured part of the eye) break into the clear fluid produced inside the eye. These tiny pigment granules flow toward the drainage canals in the eye and slowly clog them. This causes eye pressure to rise. Treatment usually includes medications, laser surgery, or conventional surgery.

This form of secondary open-angle glaucoma occurs when a flaky, dandruff-like material peels off the outer layer of the lens within the eye. The material collects in the angle between the cornea and iris and can clog the drainage system of the eye, causing eye pressure to rise. Pseudoexfoliative Glaucoma is common in those of Scandinavian descent. Treatment usually includes medications or surgery.

Injury to the eye may cause secondary open-angle glaucoma. Traumatic glaucoma can occur immediately after the injury or years later. It can be caused by blunt injuries that bruise the eye (called blunt trauma) or by injuries that penetrate the eye.

In addition, conditions such as severe nearsightedness, previous injury, infection, or prior surgery may make the eye more vulnerable to a serious eye injury.

The abnormal formation of new blood vessels on the iris and over the eye's drainage channels can cause a form of secondary open-angle glaucoma.

Neovascular glaucoma is always associated with other abnormalities, most often diabetes. It never occurs on its own. The new blood vessels block the eye's fluid from exiting through the trabecular meshwork (the eye's drainage canals), causing an increase in eye pressure. This type of glaucoma is very difficult to treat.

This rare form of glaucoma usually appears in only one eye, rather than both. Cells on the back surface of the cornea spread over the eye's drainage tissue and across the surface of the iris, increasing eye pressure and damaging the optic nerve. These corneal cells also form adhesions that bind the iris to the cornea, further blocking the drainage channels.

Irido Corneal Endothelial Syndrome occurs more frequently in light-skinned females. Symptoms can include hazy vision upon awakening and the appearance of halos around lights. Treatment can include medications and filtering surgery. Laser therapy is not effective in these cases.

Childhood Glaucoma refers to the presence of glaucoma in a child, and occurs in 1 out of every 10,000 births in the UK. Congenital glaucoma is the common term used for a glaucoma diagnosed in infancy or early childhood.

This glaucoma is caused by abnormal intraocular fluid drainage from the eye as a result of a blocked or defective trabecular meshwork (the mesh-like drainage canals in the eye). Congenital glaucoma may be due to an hereditary defect or abnormal development during pregnancy.

In other cases, an abnormal drainage system may be the result of some other disease in the eye which results in secondary glaucoma. In these cases, the glaucoma may be associated with recognizable iris (the coloured part of the eye), corneal, or other eye problems.

In an uncomplicated case of congenital glaucoma, microsurgery can often correct the structural defects. Other cases are treated with medication and surgery.